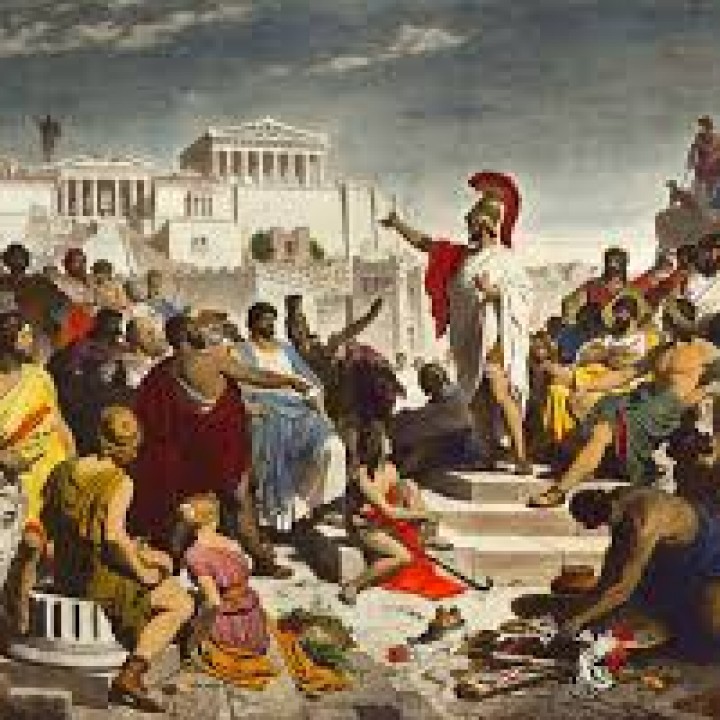 The impending Brexit caused a massive headache to UK citizens. I know that because my husband suffered a week long one immediately after the referendum! Today Brexit preoccupies most of the daily news. The one piece of news that attracted my attention recently is the existing debate on the value of Direct Democracy vs the value of Parliamentary Democracy. in relation to the Brexit referendum that took place more than 3 years ago. I also noticed that journalists and politicians who engage in these discussions fail to truly understand what political elements Direct Democracy involves. Elements that do not necessarily exist in British society.

In order to clarify how Direct Democracy functions, I would like to go back in history; 2,500 years back.  My intention is to revisit Ancient Athens, the cradle of modern democracy. The archetype of Direct Democracy functioned there for several decades before it collapsed. How did the Athenians make it work; albeit for a comparatively short period of time?

The Athenian democracy evolved over several decades. There was no single event that set it off and it certainly did not involve any referendums. During the 450s several constitutional changes had an impact on its final formation. In 457/6 chief magistracy was extended to another class of citizens. At the same time the importance of the chief magistrate (archon) was receding in front of the significance of the generals (strategoi). The generals were ten and could hold their post for years. Secondly, in 453/2 thirty travelling justices could decide on minor lawsuits.

In 451 Perikles, the famous Athenian politician, put forward a law that limited Athenian citizenship to men who were born of an Athenian mother as well as an Athenian father (Aristotle, Pol., 26.4). The reason was that the number of citizens was increasing fast. The development of Athens as a hub of economic and political activity attracted many foreigners. These moves may have caused the consternation of the true Athenians who came from old and distinguished families. The law was enforced in 445 when Psammetichus (an Egyptian ruler) sent a gift of grain to Athens to be distributed to its citizens. A check of the Athenian records indicated that 10% of the citizen population were wrongly registered and they were immediately excluded from the distribution of grain (Plutarch, Perikles, 37.4).

During the fifth century BC only Athenian males over 18 years of age and of Athenian descent owned land within the territory of the city. These could vote, they could participate in the government, while they joined the army. Foreigners (metics) could be awarded citizenship in exceptional circumstances for their services to the city. In Athens resided also large numbers of slaves, who did not have a right to citizenship. We do not have any information about their overall number but we do know that 20,000 of the slaves who worked in the mines of Lavrion deserted their post, when the Spartans entered Attica in 413 BC. (Thucydides, 27.5). Women and children were also excluded from voting.

But how did the Direct Democracy system work in practice? A Council of Five Hundred  citizens prepared the decrees. These were voted by the Assembly, the gathering of all Athenian citizens. There were no political parties, no Labour and no Torys. The Assembly met four times a year, while the Council met daily; apart from the major religious holidays (and there were a LOT of them!) The Council publicised the agenda in advance of the meeting of the Assembly. Decisions were not taken instantly and sometimes the process could last for days. Unsurprisingly not all of the citizens attended the Assembly. The space was restricted and so was personal availability. In order to make things more efficient, citizens divided the state’s work in small boards of ten. None could be appointed in the same board in the future. For the system to work, all citizens should have held some post during their lifetimes. The citizens who did not participate in government or, in fact, voted regularly were considered idiotes (meaning privates/ and idiots).

Evidently, the Athenians understood very well that in order for Direct Democracy to work they needed two essential elements.

The first one was the existence of a large ruling body with executive powers. They preferred to rely on the judgement of a number of generals, instead of an individual archon. And this is why they provided a small salary to thirty traveling judges who would give their judgement across the Athenian territory (a territory that probably was no bigger than London, if we exclude the colonies). And this is why they elected a council of 500 citizens that would oversee the agenda on a daily basis. It looks as if all of the above bodies would supervise the everyday issues as they arose.

Secondly, they understood that Direct Democracy cannot exist without the participation of a vast numbers of citizens. At the height of Athenian power, the citizen body did not exceed a few hundred thousand citizens. All of them were expected to take active part in the decisions of the state. The issues were probably not as complicated as they are today, so the average citizen could provide an educated opinion on the issues at hand. Even if not all of them were present simultaneously at the quarterly assembly, the vast majority of them would have been there at one point or another. Otherwise, they would have been shamed into doing so.

Which brings us to the situation in the UK today. The recent constitutional debate focuses on the merit of Direct Democracy vs Representative Democracy. The majority of the interviews I overheard exalt the virtues of Direct Democracy. Most British people seem to believe that the decisions of the majority who vote directly on issues at hand are more valid than the decisions of their representatives. After all, the representatives are just a handful of people with personal and political agendas that may be in conflict with the interests of the majority.

I will not talk here about the lack of a written constitution in Britain or the fact that only 650 parliamentarians represent more than 60 million of the population. These may cause multiple problems, even though such problems may be offset by the checks and balances of the democratic system. For many citizens it is a no brainer that their personal decision should be more valid than the decision of their elected representatives. And I am one of them. I do not believe that the MP of my constituency always have my best interests at heart. I know enough of party politics to despise the intra-party feuds and the impact they have to the country as a whole. A Direct Democracy that brings decision making to its roots would be ideal, from my perspective.

However, is Direct Democracy achievable in modern Britain? Again, in my view, it would be an untenable situation! In Ancient Athens the population was probably around 300,000 people at the height of the empire. Only 30,000 out of those would have been eligible to vote and get involved in the affairs of the state. How could these numbers compare to the 63,000,000 people living today in Britain, of which 46,000,000 are the electorate? And how many people of these 46 million are actually actively involved in democratic activities, beyond voting every 4-5 years? Certainly, the utopia of a Direct Democratic System in the UK has been brought forward not because it is sustainable but because it serves the distorted logic of some Brexit supporters.

These supporters claim that the 2016 referendum is the manifestation of the democratic will of the British citizens who exerted their democratic rights in a direct way. This is certainly true. They did exert their rights in a direct way but not within a System of Direct Democracy. Instead, they asserted their preference in a system of Representative Democracy. If the same people voted on the matter 4 times a year (as the Ancient Athenians did); if they took the matter in their hands and they negotiated directly with the EU (as the Ancient Athenians would have done); and if they participated in committees that would have prepared the departure of the country from the EU (as the Ancient Athenians would have done); then, they would have been able to claim that the results of their Direct Democracy should be upheld.

The likelihood of the above, though, is slim. I do not keep my hopes high that the British people will become so interested in politics that they will get personally involved in state decisions. Until then, I would suggest that they listen critically to the debates surrounding them, so that they do not get fooled into taking any decisions against the interests of their country.

Humans of the Future – Avalokanam

New Medieval Books: In the Shadow of the Beast, by C.J. Adrien