A massive stone wall from a 16th century castle built by warlord Toyotomi Hideyoshi has been unearthed on the grounds of the Kyoto Imperial Palace. The remains of the wall and a filled-in moat were discovered under the foundations of the Kyoto Sento Imperial Palace, the compound within the palace complex where emperors lived after they abdicated.

One section of castle wall, constructed in a north-south direction, measures about eight meters in length. The wall measured between 1 meter and 1.6 meters high in places and was comprised of three to four stone layers. Although the upper portion had collapsed, the wall in its prime was likely around 2.4 meters high.

The techniques used to construct the castle wall likely date to the Azuchi-Momoyama Period (1568-1600) based on the careful manner in which blocks of stone were placed.

Researchers theorized that the moat was originally at least three meters wide and 2.4 meters deep.

Its age and owner were confirmed by the discovery of gold-plated roof tiles bearing Toyotomi’s crest in the fill of the moat.

Toyotomi Hideyoshi was born in 1537, the son of a peasant and infantry grunt. Orphaned at seven, Hideyoshi made his way in the world working as a servant and later as a fighter for powerful daimyō Oda Nobunaga. Within 10 years, he was one of Nobunaga’s most successful generals. Nobunaga was assassinated by enemy samurai Akechi Mitsuhide in 1582. Hideyoshi fought Mitsuhide and won, cementing his power and influence in the Oda Clan and from there quickly rising in the military and political ranks.

In 1585 he attained the positions of Chancellor of the Realm and Imperial Regent (“kanpaku”). He ruled Japan in all but name by this point, wresting province after province from their local potentates to unify the country. He built a number of castles, including the massive Osaka Castle that is today one of Japan’s most important landmarks, and the Jurakudai in Kyoto.

The palace whose remains were just found was completed in 1591, the year before Hideyoshi’s death. The current Kyoto Imperial Palace was built in 1855, but it was eighth iteration to be built on the site, a common practice as palaces were constantly burning down and getting rebuilt. Hideyoshi’s castle was adjacent to the imperial palace.

The only surviving records of this castle were written by courtiers who refer to it as “Kyoto Shinjo,” meaning “new Kyoto Castle,” so a generic term rather the actual name of the building. The scant references suggested it was relatively unremarkable, a dwelling surrounded by a defensive wall, but the archaeological remains prove otherwise. The massive wall and the gold tiles point to this having been a grand, opulent structure.

“This is the greatest discovery this century related to an excavation of a Japanese castle,” [University of Shiga Prefecture professor and castle expert Hitoshi] Nakai said.

He added that Hideyoshi likely built it so Hideyori could succeed him to the court rank of “kanpaku,” the title for an individual who served as chief adviser to the emperor. […]

Kazuto Hongo, a professor of medieval Japanese history at the Historiographical Institute of the University of Tokyo, said the Kyoto castle showed that the ancient capital still held immense importance to Hideyoshi even after he tore down the Jurakudai palace. […]

Hongo speculated that Hideyoshi built the castle as a means of passing on the authority of the high court ranks he held to his successors. Hongo noted that Hideyoshi was concerned about Tokugawa Ieyasu (1543-1616) gaining control of the nation after his death. 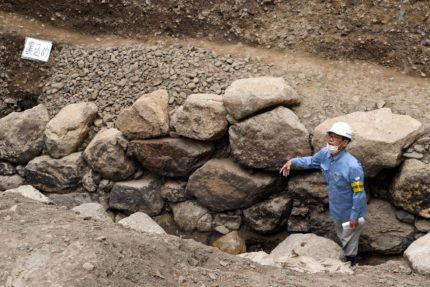 This entry was posted
on Thursday, May 14th, 2020 at 9:50 PM and is filed under Renaissance.
You can follow any responses to this entry through the RSS 2.0 feed.

The texts of the Indian Dance traditions – Part Eighteen