From the annals of randomly-encountered treasures in museums, here is an ancient Egyptian faience ball of a hedgehog curled up in its iconic defensive posture, now in the collection of the Metropolitan Museum of Art . It’s just over two inches in diameter and, I’m sure we can all agree, cute as hell. Its little snout, ears, paws and tail are all grouped together in relief on its spherical body which is peppered with black spots representing the spines. 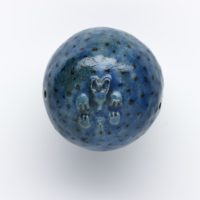 The ball is hollow inside and a fine crack along the equator indicates it was made in two halves that were combined. The ball was pierced through before firing with a single pointed instrument like a skewer, leaving holes above and below the relief. The National Museum of Scotland has an almost identical hedgeball but it was pierced horizontally, leaving holes left and right of the relief.

Faience figurines of animals were thousands of years old by the time this little guy was made. They were figural and used as votive deposits at temples in the Early Dynastic Period (ca. 3150-2686 B.C.). That religious

tradition expanded to their use as funerary furnishings in the 12th Dynasty (1991-1802 B.C.). The Met’s ball was originally dated to the Middle Kingdom (ca. 2050-1650 B.C.) when it entered the collection 30 years ago. Newer scholarship pushes it just on the other side of the boundary to the 18th Dynasty, 1550–1450 B.C., while the NMS still tentatively places theirs in the Middle Kingdom.

The spherical iteration is almost certainly not a votive deposit or funerary figurine. It’s not a figurine at all, in fact. Nobody is quite sure what it is. The holes suggest it may have been worn as a pendant, but they are not along the sphere’s central axis, and in the case of the vertical piercings of the Met’s hedgeball, a rope or chain threaded through them could not be worn around the neck because the hedgehog’s features would be rotated 90 degrees. Besides, two and a quarter inches in diameter is way oversized for a bead, even if was an amulet meant to protect the wearer.

Scholars initially hypothesized that it might be a rattle, but the holes are too small to put in small stones or whatever else would make the noise, and there are no known ancient Egyptian rattles that are spherical in shape. The piercing isn’t a function of the firing process because only one hole would be needed to prevent cracking. There is also evidence of wear and tear: the glaze at the upper edges of the holes on the Met’s ball is chipped.

So how was our hedgehog friend worn or used? To what end this cuteness?

This entry was posted
on Sunday, June 7th, 2020 at 11:13 PM and is filed under Ancient, Museums.
You can follow any responses to this entry through the RSS 2.0 feed.

The contours of disease and hunger in Carolingian and early Ottonian Europe (c.750-c.950 CE)