An inscription honoring a little-known senator has been unearthed at the ancient Roman theater of Patara, Turkey. The inscribed marble slab was discovered in May in a fire layer near the theater’s proscaenium (stage area) broken into 27 large pieces. It was puzzled back together and reviewed by epigraphists. It is a dedicated to Tiberius Claudius Flavianus Titianus Celer by his mother Vilia Procula.

Located on the southweast Mediterranean coast of Lycia, Patara was an important hub of maritime trade and travel thanks to its large natural harbor. Paul of Tarsus changed ships there to sail to Tyre en route to Jerusalem (Acts 21:1-3). It was one of the leading cities of the Lycian League and was one of only six of the 23 cities to have the maximum number of votes (three). 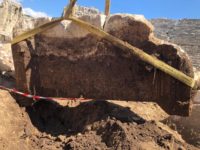 The Vilius familes was one the richest and most politically important families in Patara.  Vilia Procula was a native of the city and a major patron. Her father commissioned the construction of the proscaenium in the theater which she completed after his death. It was dedicated in 147 A.D. and was responsible for a plethora of other dedications includes one to the Emperor Hadrian, his wife Sabina Augusta and Salonia Matidia, niece of Trajan and grandmother of Marcus Aurelius.

The inscription contains previously unknown details about Celer: that he was a Roman senator, that he was governor of Cyprus and of the province of Pontus on the Black Sea (today northeastern Turkey), that he held a number of civic and judicial roles — criminal judge, member of the city grain dole committee. His mother immortalized his many fine contributions with a prominent inscription in the proscaenium.

“This is a very important inscription. We had information about Celer’s mother and father with the same name. However, we did not have enough information about him. We had a detailed knowledge. There is really valuable information for scientists specialized in ancient history. It became a gift of the Year of Patara to us,” she added.

Turkey announced 2020 as the year of Patara in a bid to promote and draw attention to the ancient city.

The inscription will be exhibited at the Demre Museum. 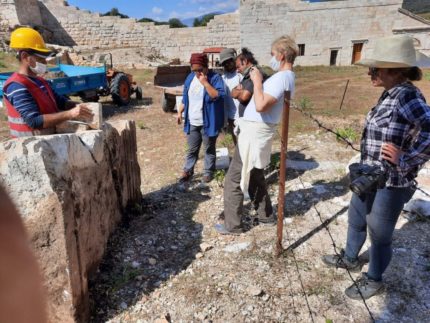 This entry was posted
on Saturday, June 6th, 2020 at 11:41 PM and is filed under Ancient.
You can follow any responses to this entry through the RSS 2.0 feed.

Philhellenism at the Onset of the Greek Revolution

This Is What Students Were Wearing When They Were Assaulted