The archaeological survey at the site of a shantytown renewal project in Sanmenxia, Henan Province, has unearthed far more than a bronze swan full of unknown liquid. Over three excavations since digging began in October of 2017, archaeologists have excavated more than nine acres of ground along the bank of the Yellow River and uncovered 602 ancient tombs.

Located between Xi’an and Luoyang, two ancient capitals in Chinese history, Sanmenxia used to serve as a military and traffic passage. Experts believe the discovery can provide valuable information for tomb evolution in the Sanmenxia area and shed light on its decline with the shift in the political power center. 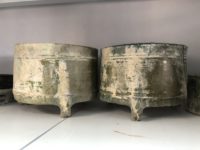 This entry was posted
on Thursday, June 4th, 2020 at 10:15 PM and is filed under Ancient, Modern(ish).
You can follow any responses to this entry through the RSS 2.0 feed.

Morality of Money in Ancient Greece and Rome

Isabella of France, Queen of England