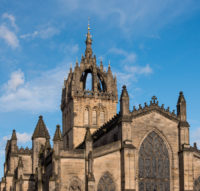 The original St. Giles Kirk was a Romanesque church founded by David I of Scotland in 1124. It’s not known when construction was completed, but the church was put to the torch by Richard II of England in 1385. It was rebuilt in Gothic style and then extensively altered in the 15th century. There are no records of when the frame was installed, and few records of when the spire was built. Chroniclers report that the church had a masonry spire by 1387 and that storks nested on it in 1416.

The South East Scotland Oak Dendrochronology project (SESOD) has been studying historic timbers to create a detailed tree-ring record for native oaks from southeastern Scotland. They thought the St Giles timbers might date to just after the construction of the masonry tower and hoped they were felled in SE Scotland, but because the supply of old growth oak was almost gone by then, most of the timber used in 15th century Scotland was imported from Scandinavia.

The dendrochronological analysis instead dated the timbers to the second half of 14th century when the crown spire was first completed. The wood came from northeastern Scotland. It was felled from the Royal Forest of Darnaway in Morayshire, source of the timber used in the construction of Stirling Castle, in the winters of 1453-4 and 1459-60. Some of the trees used were more than 300 years. This is the most recent use of Darnaway oaks known. Shortly thereafter the forest was closed to logging.

The new dendro-dates show this tower was greatly altered in the mid-15th century at a time when many other structural changes were being made at St Giles. The new dates infer the completion of the crown spire as being after 1460 and probably by 1467 when the church was granted collegiate status from the pope, although the crown spire we see today was repaired and much altered in 1653. […]

Amongst the patrons of the extensive mid-15th century construction work at St Giles are James II and, following his untimely death in 1460, his widow Mary of Guelders, who was regent of Scotland between 1460 and 1463 for their son, the infant James III. Their arms appear on shields on The King’s Pillar in the choir of St Giles, interpreted as a tribute to the late king by his devout queen. 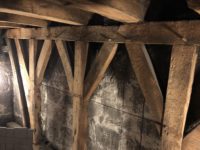 The Forest of Darnaway was forfeited to the crown after the defeat of Archibald, the Black Douglas Earl of Moray, at the Battle of Arkinholm in 1455, which may explain why timber from Darnaway was used to build the bell-frame in the tower at St Giles, through this royal patronage.

Although the timber was felled when James II was still alive, its supply to St Giles may have occurred when Mary of Guelders was regent, between 1460-1463, after James’ death in the summer of 1460. This question could be investigated further with more sampling as the precise felling dates are from the lower levels of the structure.

This entry was posted
on Tuesday, June 2nd, 2020 at 8:12 PM and is filed under Medieval.
You can follow any responses to this entry through the RSS 2.0 feed.

“Race of Aces”: A Review by Craig Martin

Pirzada Masjid in Meham, Haryana – this 16th century Masjid is crumbling due to legal wrangle!!