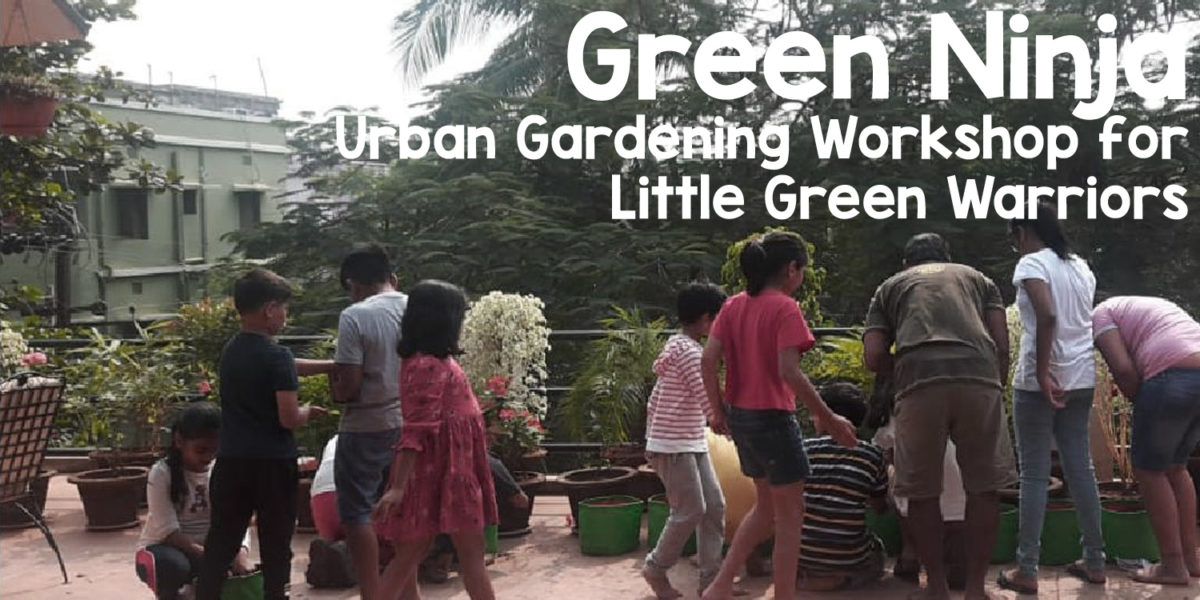 I am very excited about this post. A few days earlier I got an opportunity to conduct my very first Organic Urban Farming Workshop for kids. The workshop was organized by Aikyam located in Old Town area of Bhubaneswar. Surrounded by canopies of different trees of varying shades of green, the open terrace of Aikyam provided the ideal setting for the workshop. But having never conducted any programs for children earlier I was nowhere near being the ideal instructor. So I really had to prepare well. There were multiple iterations on the content of the workshop, but finally I knew what I had to deliver. But the biggest challenge of the workshop was not what, but how it had to be delivered.

The children for the workshop were going to be aged between 7 and 12. So I knew I had to capture their attentions right from the word go and then keep them interested for a good four hours after that. I researched a little on what cartoon characters, activities, nursery rhymes kids are familiar with and used them to set the flow of the workshop. I even wrote funny rhymes and songs that the children could sing along and learn. The measurements of the potting mix recipe also had to change so that kids could easily do it. It took me a good 7-8 days to get prepared for the workshop. Then a few iterations later I was ready with the presentation and flow of the workshop. Yet I was nervous.

Finally the day of the workshop arrived and it was time for action. The workshop started with Vinita Mitra of Aikyam teaching ‘Garden Yoga’ to the kids, which was not only enjoyed, but performed extremely well by them. Next was a awareness quiz which was conducted by me. It was heartening to see the awareness level of the children who answered 9/10 questions correctly. By this time the children were already involved in the workshop. And then for the next one hour through animations, rhymes, songs and stories they learned about the features of good soil, vermicompost, neem cake and how to make a good potting mix. A short muffin and milkshake break later they did some seed identification and then it was time to get their hands dirty. All of them followed the potting mix recipe to the T, prepared their own pots, planted seeds in their containers and watered them.

After a super energetic four hours, the workshop concluded with feedback sessions from the children and distribution of certificates. They were also handed over a plant care instruction card each. As the kids proudly carried away their own containers now filled with potting mix and seeds sown in it and waiting in anticipation for them to germinate, I felt contentment, joyful and a sense of achievement.