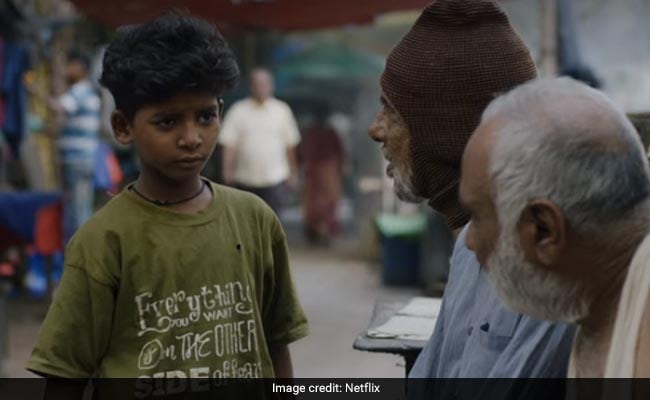 Chippa Review: Sunny Pawar in a still from the film (courtesy Netflix)

A charming little film feted at several festivals, Chippa has dropped on Netflix well-nigh unheralded. Written and directed by Safdar Rahman, it boasts no star power. Not that it needs any of it. Chippa is a winning combination of heart, imagination, craft and an endearing Sunny Pawar.

A plucky ten-year-old boy who has nothing to lose but the smarts that help him survive the streets of Kolkata lives on a footpath outside a Park Circus hospital. On a whim, he sets out one night in search of somebody who can read Urdu for he has in his possession a letter from his absent father.

Chippa is a children’s film. The city is seen through the eyes of a homeless child. The glare of the neon lights is, therefore, inevitably less harsh and the night time desolation of the city’s neighbourhoods less melancholic. But the film does not shy away from revealing an urban underbelly of streetwalkers, alcoholics, migrants and construction workers struggling to get by in an environment loaded against them.

Sunny Pawar (young Saroo in Lion; young Gaitonde in Sacred Games) delivers a spirited performance as the titular character, whose indomitable spirit transmits warmth and brightness. Even in situations where the boy faces a hint of danger or discomfiture, Chippa stands his ground. He has no clue what the letter contains but he is curious to know. The letter could carry the promise of a new dawn.

Chippa is a bewitching fable of hope and healing, simple, heart-warming and life-affirming. If one were to quibble, the film could be faulted for romanticising the hardships of the titular character’s benighted life. But, then, this is a fairy tale of a poor little boy who will not let the rough end of the stick get the better of him.

The positive coating on the film springs from Chippa himself. His faith in people – and himself – never wavers. Yes, he does take to his heels on one occasion and freezes in fear and confusion on another, but his wits are always about him.

It is on the eve of his tenth birthday that Chippa stumbles upon his father’s letter. He is at daggers drawn with his grumpy grand-aunt (Mala Mukherjee), who sells samosas and constantly rebukes him for not lending her a helping hand. The letter gives Chippa a pretext to run away. Despite his depressing circumstance, he views the world with wide-eyed wonder and optimism.

Not surprisingly, finding someone with knowledge of Urdu in the city’s underbelly (and in the course of a single night at that) proves far more difficult than Chippa’s innocent mind can either anticipate or comprehend.

On his nocturnal peregrinations, he meets people who ignite his vivid imagination, a trait that enables him to frequently erase the realities of the here and now and transport himself into dream worlds that are way beyond his grasp.

He chances upon a post box. It has a few letters sticking out of it. He pulls them out, crosses the street, sits down on the sidewalk, fishes out a drawing book from his little backpack and sketches the Eiffel Tower that he sees on a postage stamp. The film uses animation to capture Chippa’s flights of fancy: his rough rendition of the Paris landmark triggers a leap into a dreamscape in which a French girl writes him a letter.

The film steers clear of the visual cliches of Kolkata. It offers no shots of the Howrah Bridge, the Victoria Memorial, the Hooghly or Durga Puja festivities. This Kolkata is a city that comes to life when the crowds and the cacophony retreat, when the population goes to sleep, and creatures of the night, street dwellers and graveyard shift workers have a free run of the deserted roads.

Chippa runs into a cabbie (Sumeet Thakur, last seen in Extraction and Commando 3), a friendly beat constable (Gautam Sarkar), an old eatery owner (Masood Akhtar) who can spin quite a yarn, a mail van driver (Joyraj Bhattacharya) and his simple-minded assistant (Kalpan Mitra), who, like the taxi driver, is a migrant to the city.

The night is long and Chippa’s adventures lead him into other little episodes that show the audience the joyful side of his precocity. In one sequence, flummoxed by a group of transgenders, the boy flees. In another, he advises a drunk man (Veer Rajwant Singh) outside a bar to hail a cab instead of driving back home in his own car.

Chippa is a far cry from the hapless peasant of Jagte Raho who is taken for a thief when he enters a middle-class Calcutta residential complex looking for water to drink. The boy does ask one group of people that he meets for help to quench his thirst after a roadside tube-well does not yield any water. But he never gets into the sort of trouble that Raj Kapoor’s character encountered in the 1956 film. He is only a boy who is yet to figure out exactly how unfair life has been to him.

It is both Christmas and Chippa’s birthday. He is in a generous mood. He buys soan papdi for a cop on whose motorcycle he hitches a ride and orders a tea for a newspaper vendor (Chandan Roy Sanyal) he meets just ahead of dawn. Nearly everyone that he comes across triggers an aspiration in the boy. One moment he wants to be a taxi driver, the very next he wants to play the trumpet at big weddings. He never stops dreaming.

Chippa is a love letter to the streets of Kolkata as they are when all goes quiet. From the standpoint of a boy blessed with wisdom that belies his age, the city has a concrete yet nebulous quality. It exudes both magic and world-weariness, captured in evocative frames by cinematographer Ramanuj Dutta.

The musical score by Belgian composer Cyrille de Haes, working with Dibyokamal Mitra’s The Big Other, provides a soundscape that captures both the stillness and the poetry of the night, besides the resolute soul of those that rise above the fatigue of a hard day to keep life coursing through the veins of the city when sleep descends on large swathes of it. Chippa is a coming-of-age film that touches an instant chord without overplaying its hand.

US Secretary Of State Mike Pompeo Says,China Using Tactical Situation On Ground To Its Advantage