India registered a record jump of 8,909 novel coronavirus cases, pushing the total number of such infections to 2,07,615 on Wednesday, while the toll rose to 5,815 with 217 more deaths, according to the Union health ministry.

The health ministry said it has boosted the COVID-19 testing capacity to around 1.4 lakh per day.

In its morning update, the health ministry said that the country had reported 8,909  new patients and 217 fatalities in the 24 hours since 8 am on Tuesday. With this the total number of cases in the country climbed to  2,07,615 and the toll rose to 5,815.

As many as 1,00,302 people have recovered, while one has migrated and the number of active cases of the coronavirus disease (COVID-19) is now 1,01,497, said the ministry.Around 48.31 percent of the patients have recovered so far, a ministry official said. As many as 7,123 cases ae being reassigned to states, it said.

Six more people died from the pathogen in Madhya Pradesh, followed by five each in Rajasthan and Uttar Pradesh, and four in Telangana, There were two deaths each in Haryana and Jammu and Kashmir, and one each in Kerala, Chandigarh, Ladakh, Punjab and Uttarakhand.

Of the total 5,815 fatalities, Maharashtra accounts for 2,465 deaths followed by 1,092 in Gujarat and 556 in Delhi. In Madhya Pradesh, 364 people have died so far, followed by 335 in West Bengal, 222 in Uttar Pradesh and 203 in Rajasthan. Tamil Nadu has registered 197 deaths so far, while there have been 92 fatalities in Telangana and 64 in Andhra Pradesh. 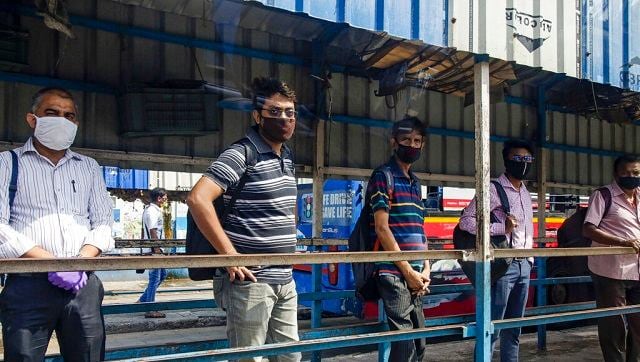 India registered a record jump of 8,909 novel coronavirus cases, pushing the total number of such infections to 2,07,615 on Wednesday. AP

Fifty-two people have succumbed to the infection in Karnataka, followed by 46 in Punjab, 33 in Jammu and Kashmir, and 24 in Bihar. Haryana has registered 23 fatalities, while the toll in Kerala is 11. There have been seven deaths each in Odisha and Uttarakhand.

Five COVID-19 fatalities each have been reported from Himachal Pradesh, Chandigarh and Jharkhand, while four have died in Assam. A person each has died due to the pandemic in Meghalaya, Chhattisgarh and Ladakh, according to the data.

More than 70 percent of the deaths are due to comorbidities,said the ministry.

The health ministry also said that the number of COVID-19 tests across the country has crossed the 40 lakh-mark, while the daily testing capacity has been ramped up to 1.4 lakh through 480 government and 208 private laboratories.

Many states reported an increase in both infections and deaths arising from it through the day and a PTI tally based on figures releases by state and UT governments put the aggregate number of cases in India till 9.30 pm at  2,09,163. According to the news agency, 5, 996 have been reported in the country so far while a total of 1,03,460 persons have recovered from the disease.

India is the seventh worst-hit nation by the COVID-19 pandemic after the US, Brazil, Russia, the UK, Spain and Italy. The infection which first emerged in China in December last year has now affected 62,87,771 people across the world and has claimed 3,79,941 lives, according to the World Health Organisation (WHO) COVID-19 tracker.

Of the total number of cases reported in India till date, nearly 1 lakh new cases having emerged in a span of 15 days. The first COVID-19 case in India was detected on 30 January.

COVID-19 fatalities in worst-affected Maharashtra spiked by 122 on Wednesday, the highest in a single day, including 49 from worst-hit Mumbai, taking the death toll to 2,587, the state health department said. The number of cases shot up by 2,560 to 74,860, it said.

A total of 996 patients were discharged from hospitals in the day, taking the tally of the recovered cases to 32,329 so far, a statement said.

The spread of the virus also continued in Tamil Nadu, with the state reporting more than a thousand cases , including an all-time single-day high in the capital city, for the fourth straight day on Wednesday, taking the total infection count to 25,872. The state also reported 11 more COVID-19 deaths, taking the toll to 208.

Of the 1,286 new positive cases, which is also a new single-day high for the state, as many as 15 were returnees from abroad and 27 from other states, while Chennai accounted for 1,012 of the fresh infections, its highest in a day so far, a health department bulletin said.

In Goa, as many as 40 people from a COVID-19 containment zone in Goa tested positive for the disease on Wednesday, Chief Minister Pramod Sawant said while attributing the “local transmission” to one family. The family members consulted a private medical practitioner after developing COVID-19 symptoms, instead of going to a testing centre, he said.

Kerala reported its highest single-day spike of 86 cases, taking its tally to 1,494. Those having tested positive included a doctor and four health workers. More than 1.6 lakh people are under observation in the state. Among the new cases, 53 people had come from abroad and 19 from other states, Kerala Chief Minister Pinarayi Vijayan told reporters after a COVID-19 evaluation meeting.

In the north, Himachal Pradesh’s remote Kinnaur district reported its first two cases after a couple tested positive after returning from Delhi.

Barring Lahaul-Spiti, now 11 of the 12 districts in the state have COVID-19 cases.

Uttarakhand also saw 23 more people testing positive, taking its tally to 1,066. According to the state government bulletin, the people who tested positive had travelled to Delhi, Aligarh, Mumbai and Hyderabad. As the number of infections among those returning from other states has continued to rise, the state government has extended the quarantine period to 21 days for those returning from the country’s 75 worst-hit cities.

According to an order issued by Chief Secretary Utpal Kumar Singh, people returning from the 75 highly infected cities will be quarantined at an institutional facility for a week. Thereafter, they will be home quarantined for 14 days.

In Nagaland, nine more people tested positive and all of them had returned to the state last month in a migrant special train. In Sikkim, a man who returned from Delhi recently tested positive, becoming the second case of COVID-19 in the hill state. Megalaya and Mizoram also saw new cases among those having returned from other states.

In the National Capital, a five-member committee has been constituted by the Delhi government to strengthen the healthcare infrastructure and look into overall preparedness of hospitals to battle COVID-19.

In the meantime, a protest by the AIIMS Nurses’ Union over their working conditions entered the third day. The premier medical institution in the National Capital has seen at least 329 staff members having tested positive for COVID-19 so far, of which 47 are nursing staff.

In a letter to AIIMS Director Randeep Guleria, the nurses body has put forward a number of demands including implementation of a uniform four-hour shift with personal protective equipment in COVID-19 areas of the hospital, a uniform rotation policy between COVID-19 and non-COVID-19 areas, and establishment of proper donning and doffing area.

Delhi borders sealed for a week, salons to open, no odd-even scheme for shops in National Capital, says Kejriwal

Coronavirus roundup: Developments in India and rest of the world | India News