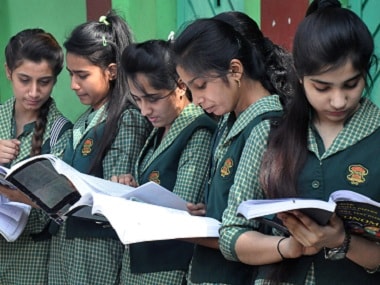 Three students from Bilaspur  — Vansh Gupta, Shagun Rana and Anisha Sharma were ranked third with 98.43 percent (689) marks in the exam.

The fourth rank went to Shrey Sharma (98.29 percent or 688 marks) of Minerva Senior Secondary School in in Ghumarwin, Bilaspur.

Six students scored the fifth highest mark (687 out of 700)  in the examination  —  Laila from DAV PUblic Schoo at Rangri Manali in Kullu, Ansh Bhardwaj from New Era School of Science at Chhatri in Kangra, Vanshika of Amar Shanti Model Public School at Sinhoti in Kangra, Karun Kumar of Government Senior Secondary School at Holi in Chamba and Shagun Sharma of Minerva Senior  Secondary School at Ghumarwin in Bilaspur

The Class 10 Board examination witnessed an improvement in result with 68.11 percent clearing the exam as compared to 62.01 percent witnessed  in 2019.

According to a report in Hindustan Times, 23 girls and 10 boys have made it to the top 10 merit list.

Girls outshined boys once again in the Class 10 board examination with a total of 71.5 percent of girls clearing the exam while 64.9 percent of the boys who appeared passed the exams, the MoneyControl.com report said.

The passing percentage among both boys and girls was also an improvement over last year’s 64.33 percent and 57.48 percent, respectively, the news website added.

In 2019, the results were declared on 29 April. Atharv Thakur from Hamirpur district had secured 98.71 percent and had emerged the topper of the matric exams.  The second rank was shared between three — Paras, Dhruv Sharma and Ridhi Sharma, who all scored 98.57 percent. Kompal Zinta came in third with 98.43 percent.

Candidates can check their results on the official website hpbose.org. The exams concluded on 19 March.

Here are the steps to view the marksheets:

Step 5: Download and save your results for future reference

Last year, the Class 10 results were declared on 29 April. However, the results, which are usually announced in May, were delayed due to the coronavirus pandemic.

According to a notification released last month, students will also be allotted grace marks in subjects like Sanskrit and Urdu.

HPBOSE was established in 1969 and has its headquarters in Dharamsala currently. The board prescribes syllabus, courses of instructions and textbooks for schools in Himachal Pradesh. As many as 5 lakh candidates annually appear in the examinations conducted by the board.

Ahead of border talks, Chinese mouthpiece warns India against US, asserts Beijing won’t give up ‘any inch of territory’ | India News

If movement of migrant workers was allowed without the basic preparations being made, it would have led to an unmitigated catastrophe, says BJP general secretary Bhupender Yadav