Uttar Pradesh chief minister Yogi Adityanath announced Rs 2 lakh compensation to the families of the migrant workers who were killed in the accident in Auraiya and Rs 50,000 to those who suffered from major injures.

Those who have sustained serious injuries have been taken to PGI Saifai for treatment, while others have been admitted to a hospital in Auraiya.

Indian Naval Ship INS Jalashwa left Male port in Maldives for Kochi with 588 Indian citizens on board on Saturday morning. The exercise to repatriate Indian nationals from foreign shores by sea is part of phase two of operation Samudra Setu.

NITI Aayog CEO Amitabh Kant said that India’s test-positivity rate (TPR), which is the ratio of positive cases to the total tests conducted, is just at 4 percent while USA’s TPR was at 14 percent.

“Since 20 March, our testing has grown by 100 times. Also, India is one of the only seven countries to have crossed two million tests. Focus on high case load cities,” he said.

Slamming the Uttar Pradesh government over Auraiya accident, Samajwadi Party chief Akhilesh Yadav said that the state government must take moral responsibility for the mishap and offer an ex-gratia of Rs 10 lakh each to families of victims.

Uttar Pradesh chief minister Yogi Adityanath directed that all the injured in the Auraiya accident be provided medical care immediately. He has instructed the commissioner and IG Kanpur to visit the site and give the report on the cause of the accident immediately.

“Instructions have also been given to provide all possible relief to the victims, to provide proper treatment to the injured and to promptly investigate the accident,” tweeted Adityanath.

At least 24 migrant workers were brought dead, 22 have been admitted and 15 who were injured have been referred to the Saifai Medical College hospital. They were going to Bihar and Jharkhand from Rajasthan, said Archana Srivastava, Chief Medical Officer (CMO) Auraiya.

More than 20 migrant labourers were killed and dozens were left injured after the truck they were travelling in collided with another in Auraiya of Uttar Pradesh early on Saturday.

“The incident took place at around 3.30am. Twenty-three people have died and around 15-20 have suffered injuries. Most of them are from Bihar, Jharkhand and West Bengal,” Abhishek Singh, Auraiya’s district magistrate, was quoted as saying by ANI.

India registered an increase of 100 deaths and 3,967 COVID-19 cases in the last 24 hours since Thursday morning with confirmed cases reaching 81,970 and fatalities from the novel coronavirus now at 2,649, according to health ministry, even as indications emerged about greater relaxations in the fourth phase of the lockdown beginning Monday while the Centre announced fresh measures to ease economic burden of the pandemic.

There are more than 51,000 active cases, while nearly 28,000 have recovered, giving a recovery rate of over 34 percent, the ministry said.

However, going by the numbers declared by different states and Union territories, and a tally maintained by news agency PTI, India seems to have 85,538 cases as of 9 pm Friday, surpassing China’s official tally of 82,933 confirmed COVID-19 cases on Friday. 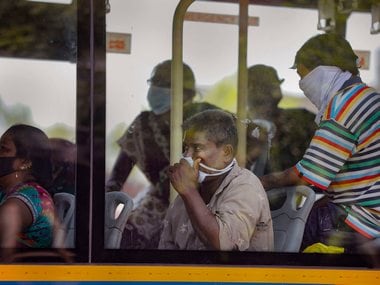 Based on the PTI figures, India is now the 11th most affected nation in the world, but each one of the top-ten have one lakh or more cases.

The US tops the charts with more than 14 lakh cases, followed by Russia, UK, Spain, Italy and Brazil with over 2 lakh cases each; and France, Germany, Turkey and Iran having over 1 lakh cases each.

On Friday, Jammu and Kashmir, Bihar and Karnataka breached the 1,000-mark in terms of the number of people having tested positive, while testing and containment measures were ramped up in places like, Kerala, Goa and Manipur that were being seen as being mostly virus-free till a few days back. Even a quarantine centre had to be sealed in Manipur.

On the other hand, large numbers of cases continued to get detected in big urban clusters. Maharashtra, the most-affected state, reported 1,576 new cases to take its tally to 29,100, while its death toll rose to 1,068.

In Mumbai, one of the worst-hit cities in Maharashtra and the country, the facilities at the Wankhede Stadium are likely to be used for COVID-19 containment.

Of the 100 deaths reported since Thursday morning, 44 were in Maharashtra, 20 in Gujarat, 9 in Delhi, 8 in West Bengal, five each in Uttar Pradesh and Madhya Pradesh, four in Rajasthan, two each in Tamil Nadu and Karnataka and one in Andhra Pradesh.

The death toll reached 35 in Karnataka, 34 Telangana and 32 in Punjab.

Haryana and Jammu and Kashmir have reported 11 fatalities each due to the disease while Bihar has registered seven and Kerala has reported four deaths.

Jharkhand, Chandigarh and Odisha have recorded three COVID-19 fatalities each while Himachal Pradesh and Assam have reported two deaths each.

Meghalaya, Uttarakhand and Puducherry have reported one fatality each, according to the ministry data.

More than 70 percent of the deaths are due to comorbidities (existence of multiple disorders), according to the ministry.

At a meeting of a group of ministers chaired by Union Health Minister Harsh Vardhan, it was stressed that the focus of COVID-19 management strategy needs to be on the states with the highest number of confirmed cases and fatalities. Also, focus is needed on treatment and case fatality management, for which timely detection and contact tracing were the best way forward.

Centre focuses on agriculture in third tranche of stimulus

The Finance Ministry in the meantime unveiled the third booster dose aimed at helping the agriculture sector and those involved in allied activities tide through the pandemic.

The govt also said that it will be amending the stringent Essential Commodities Act to remove cereals, edible oil, oilseeds, pulses, onions and potato from its purview.

Also, a new law will be framed to give farmers the option to choose the market where they want to sell their produce by removing inter-state trade barriers and providing e-trading of agriculture produce.

However, Congress chief spokesperson Randeep Surjewala, howver, slammed the finance minister’s plan, saying the Narendra Modi government has not put a single penny in pocket of farmers or farm labourers through the package.

“One thing is absolutely clear that the so-called Rs 20-lakh crore economic package has proved to be a jumla package. It reflects the ‘voodoo’ economics being followed by the prime minister and the finance minister,” Surjewala said at a press conference through video-conferencing.

Surjewala said the farmers have lost Rs 21,000 crore by distress sale of wheat far below the minimum support price (MSP) and an equal amount through other crops like chana, sarson and masoor, while anoher Rs 10,000 crore was lost through distress sale of vegetables and fruits.

“Neither farmers nor farm labourers will benefit from these jumla announcements of the finance minister. Today, farmers and farm workers are frustrated and disappointed,” he said.

Though a final decision is yet to be taken on the fourth phase of lockdown, state governments seem to be in favour of more relaxations in restrictions and for scaling up economic activities in non-containment coronavirus zones.

According to PTI, officials said there could be greater relaxations and more flexibility for states and Union territories while measures being explored include gradual reopening of the railways and domestic airlines.

During his last interaction with chief ministers, Prime Minister Narendra Modi had asked them to submit their suggestions by 15 May.

According to officials, Punjab, West Bengal, Maharashtra, Assam and Telangana want the lockdown to continue, while some states have sought powers to decide the zoning of districts — green, orange and red — as per the COVID-19 situation.

Bihar, Tamil Nadu, Karnataka are among some states which are not in favour of complete resumption of train and air services, at least till May-end.

The railways have already started special trains to 15 destinations from Delhi and have been running several hundred ‘shramik special’ trains from different parts of the country. Air India is also engaged in evacuation of thousands of Indians stranded abroad during the lockdown under the ‘Vande Bharat Mission’. Meanwhile, the AAI issued guidelines for domestic passengers to follow while using flight services.

However, there have been cases of people testing positive after reaching their native places using these trains and flights.

Final guidelines will be issued by the Ministry of Home Affairs after going through the suggestions of various state governments.

The Supreme Court which has postponed its summer vacation by five weeks, was in the news on Friday after a bench headed by Justice L Nageswara Rao and comprising Justices SK Kaul and BR Gavai, dismissed two PILs related to the COVID-19 situation.

While one PIL sought closure of liquor shops across the country, the other sought to provide food, water and travel for migrants stranded across India due to lockdown.

“How can we stop them from walking?” the bench said stating that it was impossible for the court to monitor who is walking and who is not.

The bench added that it was up to the state governments to take necessary action to dissuade migrant workers from walking from state to state.

“Let the state decide. Why should the court hear or decide?” the court said on Friday.

The SC’s dismissal came even as more reports came to surface of migrants walking to their homes. In one such visual, a migrant mother was seen pulling a suitcase while her child slept half hung on it.

As for the PIL seeking closure of liquor shops citing violation of social distancing norms, the bench dimissed it as well, observing that it has been filed only for publicity.

Migrant Workers In UP,

Migrant Workers Killed In UP,

Netflix Starts To Bring Streaming Quality Back To Normal

Places of worship, accommodations, malls to reopen in Assam on June 8