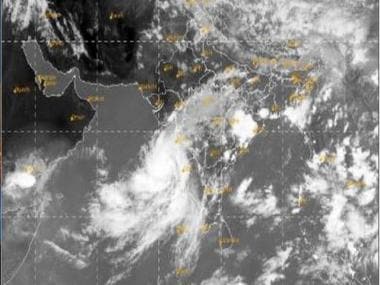 Cyclone Nisarga LATEST Updates: The cyclonic storm will make landfall near Alibaug, about 100 km from Mumbai, triggering heavy rainfall and wind with speed up to 110 kilometre per hour, the India Meteorological Department (IMD) said on Wednesday.

Eye diameter is about 65 km as observed through radar thus, the diameter has decreased during past one hour indicating intensification of system. Hence wind speed has increased from 85-95 kmph to 90-100 kmph gusting to 110 kmph, the IMD tweeted.

Ahead of the expected landfall of cyclone ‘Nisarga’ in Alibaug in Maharashtra’s Raigad district, Mumbai and its metropolitan areas received rainfall since evening on Tuesday, which intensified later in the night.

The IMD has predicted moderate rainfall in most parts of the metropolis and heavy to very heavy rainfall in isolated places over the next 24 hours.

According to IMD, at present, the depression is lying 300 kilometre south-southwest of Alibag, and 350 kilometres south of Mumbai. It is very likely to move north-northeastward and cross north Maharashtra and adjoining south Gujarat coast.

It will make landfall as a ‘severe cyclonic storm’ with a wind speed of 100-110 kmph gusting to 120 kilometres per hour.

In a video message, NDRF Director General (DG) SN Pradhan said, “Gujarat and Maharashtra have 11 and 10 teams respectively and they are being deployed in the coastal districts facing the Arabian Sea”.

“This will constitute a total of 33 teams in the two states,” the officer said.

Flight operations in Mumbai were partially hit due to the cyclonic storm approaching the west coast. Vistara put out an advisory saying, flights to/from Mumbai and Goa are likely to be impacted.

“Please visit http://airvistara.com or SMS UK<Flight no.> to 9289228888 to check updated flight status before booking and leaving for the airport,” it tweeted.

Private varsities will get autonomy to fix fees | India News