Coronavirus Outbreak LATEST updates: 587 police personnel have been found COVID-19 positive in the last 24 hours taking the total number of affected cops to 1,758, out of which 18 have died due to the virus and 673 have recovered, according to Maharashtra Police, reports ANI.

Eleven people who travelled to Goa in the Delhi-Thiruvananthapuram Rajdhani Express train on Saturday, have tested positive for coronavirus, taking the total number of such cases in the state to 66, officials said on Sunday.

Assam on Sunday claimed to have conducted more COVID-19 tests than Kerala, which was once the highest affected state. This claim came from Assam health minister Himanta Biswa Sharma who released a series of tweets giving details about the tests, said that in comparison to Kerala’s 52771 tests, Assam has conducted 55,862 tests so far.

As India is set to resume its domestic civil aviation operations from 25 May, the Delhi airport will be handling around 380 flights on Monday, a senior official told PTI.

Maharashtra Home Minister Anil Deshmukh has said it is “extremely ill-advised” to reopen airports in red zone amid the coronavirus pandemic. The minister’s comments follow Union Civil Aviation Minister Hardeep Singh Puri’s announcement that all domestic flights are set to resume in India from 25 May as part of its gradual reboot of air travel services amid the pandemic.

Dr Jitendra Nath Pande (78), the former head of the medicine department at AIIMS and a stalwart in the field of pulmonology, died due to coronavirus at his residence in Siddhartha Enclave on Saturday, reports The Indian Express.

Assam Health Minister Himanta Biswa Sarma on Saturday asked people not to return to the state unless ‘absolutely necessary’ as 87 more people tested positive for coronavirus, the highest single-day jump, taking the total tally to 346.

The number of active COVID-19 cases stood at 69,597 and 51,783 people have recovered and one patient has migrated, the ministry said.

Amidst this, differences emerged among states and the aviation ministry over whether or not to quarantine fliers once domestic air travel resumes on 25 May.

Maharashtra, however, remained non-committal on domestic flights while urging the aviation ministry to allow special and concessional flights to leave from the state.

Meanwhile the Centre asked 11 municipal areas which account for 70 percent of India’s cases to step up monitoring efforts in old cities, urban slums and other high density population pockets like camps and clusters for migrant workers. 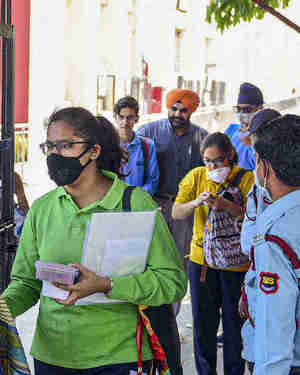 Meanwhile, India continues to be the 11th most-affected country right now, but its tally is fast approaching that of Iran, which is the tenth most affected in the world at present with nearly 1.33 lakh cases, PTI said.

On Saturday, Sikkim reported its first COVID-19 case as a 25-year-old student who recently returned from Delhi tested positive for the virus, a senior official said. The first case was detected in India on 30 January, but Sikkim had managed to stay free of it so far.

While Maharashtra has been the worst-hit state, Gujarat, Delhi, Madhya Pradesh and Rajasthan are among other badly-affected places.

Maharashtra recorded 2,608 new coronavirus cases and 60 deaths on Saturday, taking its total count of cases to 47,190 and the death toll to 1,577. At least 18 police personnel, including an officer, have died of COVID-19 in the state so far.

In Tamil Nadu, 759 new cases were reported and the death toll rose to 103 after five more people, including a 75-year-old woman, lost their lives. The new cases included those having arrived from other countries as also those having travelled from other parts of the country.

Kerala also recorded a rise in its numbers with 62 more people testing positive, including 49 returnees from abroad and from other states. More than 91,000 are under observation in the state, which had reported India’s first COVID-19 case but had managed to flatten its curve till the movement of migrants from other states and from abroad resumed.

In Himachal Pradesh, 10 more people tested positive, of which nine had returned from Mumbai and one from Punjab.

Experts have cautioned that movement of migrants and people coming from abroad could spread the infection further during their travel and also after their arrival as not all of them are put into institutional quarantine due to absence of any symptom.

Karnataka recorded its biggest single-day spike on Saturday with over 200 new cases of COVID-19, taking its tally to 1,959. Officials said that 187 of 216 new cases are returnees from neighboring Maharashtra, while others include those having returned from Gujarat, Delhi, Tamil Nadu, Andhra Pradesh and Rajasthan.

In the national capital, 591 fresh cases were recorded to take its tally to 12,910. Delhi’s death toll has also increased to 231.

Meanwhile, new coronavirus cases dropped to zero in China for the first time on Saturday, but hospitals were overwhelmed across Latin America both in Brazil and Mexico which were lax about lockdowns as well as in Peru, Chile and Ecuador which were lauded for firm restrictions and early confinement.

Turkey imposed its toughest lockdown measures yet starting Saturday for the end of Ramadan, and Yemen’s Houthi rebels urged believers to use masks and stay inside as authorities around the Muslim world try to contain infections at a time usually marked by days of multi-generational feasting and collective prayer.

Elsewhere, many governments continued easing restrictions as they face historic recessions brought on by the global battle against the virus. In the US, some regions were opening more quickly than others, despite pressure from President Donald Trump to move faster.

Infections emerged in Germany, which has drawn praise for its handling of the virus, after seven people appear to have been infected with the coronavirus at a restaurant in the northwest of the country.

The US, however, remained the hardest hit country globally, with more than 96,000 deaths among 16 lakh confirmed cases, followed by Russia and Brazil, a tally maintained by John Hopkins University showed.

On Saturday, worldwide deaths reached 3,38,000 while infections have crossed more than 52 lakh.

To quarantine or not: debate continues

Though domestic commercial passenger flights are set to resume from Monday (25 May) after nearly two months of suspension due to COVID-19-induced lockdown, the differences over whether or not to quarantine fliers continued on Saturday. While Punjab, Chhattisgarh, Goa and Jammu and Kashmir said that 14-day quarantine will be mandatory, Karnataka said that seven-day institutional quarantine will be must for passengers from high-risk states and others will have to undergo 14-day home quarantine.

Maharashtra government official on Saturday said the state had not yet amended its May 19 lockdown order which allowed only certain kinds of flights.

As per the 19 May order of the state government extending the coronavirus-induced lockdown to 31 May, all domestic and international air travel, except for domestic medical services, domestic air ambulance and for security purposes as permitted by Ministry of Home Affairs (MHA), will continue to remain prohibited across the state.

Meanwhile, civil aviation minister Hardeep Singh Puri whil saying that India will try to restart a good percentage of international passenger flights before August, said on Saturday that those using the Aarogya Setu app won’t have to undergo quarantine if their status is green.

“If you have Aarogya Setu app, and if you have got yourself tested for COVID-19 and have been found negative, and if you do not show any symptoms, then I think there is no need for quarantine,” he said.

The aviation minister had earlier rubbished the demand for mandatory quarantine asking states no to ‘create fuss’ over a domestic travel.

Puri, however, stressed that the app, is not mandatory for air passengers and they can instead give a self-declaration form.

“We have said it is an advisory, it is preferable… If you do not have the Aarogya Setu app, you can give a self-declaration form,” he stated.

“If someone has Aarogya Setu app, it is like a passport. If you have green status, why should anybody want any quarantine,” Puri said.

The Aarogya Setu app has been panned by cybersecurity experts over privacy concerns and its makers refusing to share the source code.

In an exclusive interview with Firstpost, French ethical hacker Elliot Alderson said that the Indian government must convince people of the app’s efficacy rather than force them to use it. Alderson had parked off a fierce debate on security issues related to the app earlier this month.

“To potentially be useful, a contact-tracing app needs to be downloaded and used by a lot of people. To ensure adoption of the app on a large scale among the population, you need to gain their trust. Publishing the source code is one way to get this trust,” he told Firstpost.

Meanwhile, Congress has demanded a judicial probe into the use of ‘uncertified’ Dhaman-1 ventilators on COVID-19 patients in Gujarat, alleging that the mortality rate was highest at the hospital these machines were installed.

“We also want to know if the PM-Cares Fund was used to buy 5,000 pieces of Dhaman-1 through HLL Lifecare. All these answers can only be found through an independent judicial inquiry,” Khera said.

On Saturday, Chairman Railway Board VK Yadav on Saturday said that the Railways has drawn up a schedule to operate 2,600 more trains over the next 10 days to ferry 36 lakh more migrant workers home.

The ‘shramikspecial’ trains are being operated primarily on the requests of the states, which want to send migrant workers to their home states.

According to data with the Railways, Uttar Pradesh (1,246) has received the highest number of shramik special trains, followed by Bihar (804) and Jharkhand (124) and Madhya Pradesh (112).

WHO warns of ‘second peak’ in countries where COVID-19 is seen declining; US registers 532 deaths, toll now at 98,218