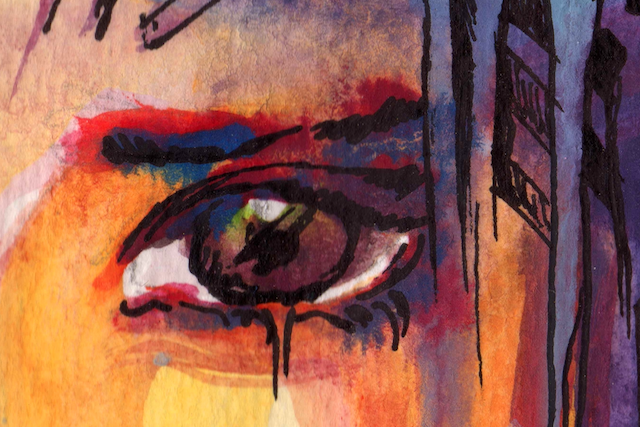 “Sometimes even to live is an act of courage.” ~Lucius Annaeus Seneca

When I was twenty-four my best friend died suddenly in a car accident. She was like a sister to me, so this plunged me into a deep depression. I had struggled with depression since I was about fourteen, but it became much worse after she passed away.

At times suicide honestly seemed like the best possible solution to what I felt like I knew was going to be another fifty years of sadness. I wasn’t depressed every day, and there were weeks and months when it seemed like things were getting better. But the depression always seemed to come back and it was wearing me down.

In Andrew Solomon’s book The Noonday Demon, he states that it is easier to convince a schizophrenic person that their delusions aren’t real than it is to convince a depressed and suicidal person that life is worth living.

“You don’t think in depression that you’ve put on a gray veil and are seeing the world through the haze of a bad mood. You think that the veil has been taken away, the veil of happiness, and that now you’re seeing truly.”

This sums up exactly how I felt. I needed others to have hope for me when I didn’t have any. I was lucky to have a great support network of family, friends, and professionals. I had a doctor and an amazing therapist who helped a lot.

I read everything I could on depression and sought out people who were going through similar things. It made me feel less alone to be able to talk openly about the darkness I was experiencing. I craved authenticity. The support I received kept me alive and gradually I started to heal.

As I write this, I haven’t been clinically depressed in two years now. I am blessed with so much love, purpose, and happiness. If I had ended my life back then I would never have met my amazing partner, become a counselor, or seen my nieces grow up.

I couldn’t skip those painful years, but I wish I knew that things would turn out okay, that I could recover, and that life could be worth living. What I’m saying is, give time a chance to heal you, give life a chance to get better. You will have to fight for it, but it can happen.

Hope is such a powerful thing, and suicide is the ultimate state of hopelessness. If you can connect with a suicidal person’s hopelessness but also hold and communicate your hope for them, that is a huge gift. They may not thank you at the time, but one day they might. It could be the thing that gets them through that night.

The Secret We Keep

Suicide is a lot more common than people realize. One in five people experience thoughts of not wanting to be alive at some point in their lifetime, but it’s not socially acceptable to admit to this. We walk around thinking we’re the only one and must be totally crazy when right next to us someone else might be thinking the same thing.

It makes sense that when we are suffering our brain looks for ways out, especially if we feel like we are a burden to others because of our suffering. Usually we can dismiss this as bad idea, an extreme and permanent solution to our problems.

But what if the suffering doesn’t seem to be ending? What if the pain just goes on and on and you can’t take it anymore?

The Ones You Leave Behind

If you are deeply depressed, you may think you are just putting an end to your suffering by ending your life, but you are actually just passing it on to the people who know and love you. It is estimated that fifteen to thirty people are severely affected by each person’s suicide. They are left with questions of “What did I do wrong?” “What did I miss?” “What could I have done?” The people left behind are also at a higher risk of suicide.

This is painful to hear when you are desperate for an escape. I don’t mean to guilt trip anyone. But instead of passing on this pain to others you could try and channel it into something positive. Even if that is just your own recovery and survival.

Some of the greatest creatives and altruists are people who have known deep pain. It was their experiences that prepared them and allowed them to create something good in the world. We are all going to die eventually, so if you do nothing else in this life, do your best with all the years life gives you.

I was at a conference recently and the facilitator, a therapist who specializes in working with people bereaved by suicide, told a story. She was walking along the street when a woman almost accidentally stepped out in front of the traffic. The therapist was too far away to grab the lady so instead she yelled out “Don’t leave us!”

This story brought tears to my eyes. It reminded me of the loss that people feel when they lose someone, especially to suicide. I think of the pain that I felt when my best friend died, the absolute grief, and then I imagine how much worse it would have been if she had died by suicide. I am so glad I did not successfully inflict that on my family.

I suspect many are feeling suicidal right now, given that we’ve all been isolated, some with mental health issues and no support; others trapped with their abusers; others still feeling overwhelmed by financial struggle. If you’ve been feeling suicidal the first thing I would suggest is telling someone. It could be a friend, a family member, a therapist or a helpline.

I know this can be scary. You might be worried they will think you’re crazy or rush you off to hospital. I can’t say for sure what will happen, but I can say that if you pick someone good, they will most likely ask you some questions and try to come up with a plan to keep you safe while you feel this way.

Be clear with what you are thinking and feeling. There is a big difference between feeling that you don’t want to be alive sometimes and planning to end your life. It’s all important and it’s okay to talk about it. If the first person doesn’t respond well, that’s okay; tell someone else. There are good people out there.

Maybe you are reading this and thinking that no one would care if you died, and your family wouldn’t miss you. Well, someone would. Maybe someone you haven’t even met yet. Someone who will never get to meet a person just like you. You are completely unique, and no one can replace you. Please don’t leave us.

Ella is a social worker who is passionate about mental health. She loves writing, hiking and watching movies. You can read more of her work at her blog Mind Balance Café.

See a typo or inaccuracy? Please contact us so we can fix it!

A Bowl of Friendship – IONS

Quieting Your Mind to Boost Your Body – IONS