How not to get
this world confused
with Paradise?

Ha! Easier now
that there are
fewer people about.

Nature
is always
close to God.

Look at all this!
We’re always in Nature,
but it’s not this easy
to feel, most of the time,
at least for me.

What glory,
so close at hand!
We’re being reminded
of this now,
in our time
of trouble, pandemic
sweeping the world!

Where are
we headed?
For this? 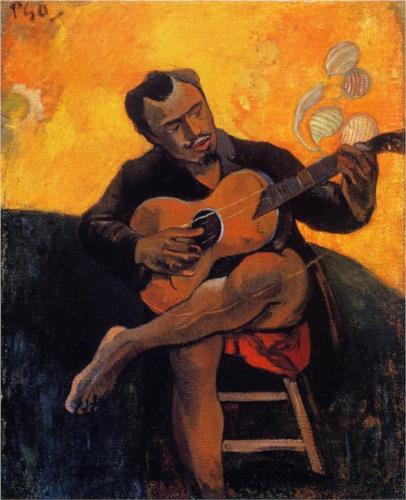 The singer while strumming
guitar before an audience
also witnesses
with an awareness behind
the main activity.

A song several minutes long
has a few parts
a bit tricky
to get through. Plus,
a lot of words
to remember.

Part of him wonders,
even as he continues
the attempt to put
all of body and mind
into the effort:
“Am I gonna make it?”
Is my ego gonna trip me up?”

with his “me,”
as it were, mostly
suspended in abeyance.

Putting forth for the sake
of art, God, communication,
what amounts to
an illusion
that this is
all there is.

One never knows
for certain
if the effort
will succeed
now:
and yet, it almost
always does.

“Why? How?”
he asks himself later,
though realization
is dawning, just what
this Mystery is:

that in the process
of taking Art seriously
by practicing and practicing,
honing and honing,

every repetition of
the right word,
chord, inflection
makes that in him
stronger.

Everyone who does
this sort of thing
walks a tightrope.
We are, after all,
human;

but part
of that being human
is a capacity
to train ourselves
to become
impeccable.

A Few Words From the Wise

Down through the ages
a few beings hailing from
diverse spiritual backgrounds
have been recognized
as voices of Truth.
In convenient shorthand
such beings have been called
“The Wise.”

The Wise know
the mighty potential
of the human voice,
artifact of breath
strained through
thin larynx-reed,
to communicate
Existence itself.

They have penetrated
into the Essence
where all secrets
are unveiled.

They know true power,
knowledge and beauty
reside there,
and are forever pointing us
in that direction.

One Sage described God
as “an infinite sphere
whose Centre is everywhere
and whose circumference
is nowhere.” *

It’s not who
or where you are
that matters. Only
how deep you dig
for Truth.

Above,
I wrote of voice.
“Voice” means essence:
surely not only
the spoken word—
although that, too.

The physical Creation itself,
say the Wise, is sound,
a dim shadow of OM,
the Original Word.***

The work of a life,
of lives: find THAT voice!
Then, you will express it
in every gesture and act—
among them, if you like,
in paint, dance, writing, speech.

* Attributed to the German mystic, Meister Eckhart, who lived in the 14th century; supposedly also touched on in ancient Greece by Hermes Trismegistus. A theme that  many mystics, philosophers, and mathematicians have commented on.

** “The illusion which most aspirants find difficult to shake is the belief that infinite Truth is an object which has to be attained in some distant future, and that all life is just a means for this attainment. If Truth were to be confined only to the future and not to the past or the present it would not be infinite. It would at once become limited as an event which has its origin in time. All that life is and has, is at once deprived of intrinsic significance if it comes to be regarded as merely instrumental to some far-off event. This is definitely a false point of view.

Life is not meant to be rich in spiritual significance at some distant date, but it is so at every moment, if the mind is disburdened of illusions. Only through a clear and tranquil mind is the true nature of spiritual infinity grasped as something which is not yet to be, but which already has been, is and ever will be an eternal self-fulfillment. When every moment is rich with eternal significance there is neither the lingering clinging to the dead past, nor a longing expectation for the future, but an integral living in the eternal Now. Only through such living can the spiritual infinity of the Truth be realised in life.

It is not right to deprive the present of all importance by subordinating it to an end in the future, for this means the imaginary accumulation of all importance in the imagined future rather than the perception and realisation of the true importance of everything that now exists. There cannot be ebb and tide in eternity, no meaningless intervals between intermittent harvests, but a fullness of being which cannot suffer impoverishment of a single instant. When life seems to be idle or empty it is not due to any curtailment of the infinity of the Truth, but it is due to one’s own lack of capacity to enter into its full possession.”  – Meher Baba, p. 166-7, The Infinity of the Truth, Discourses, Vol. 1, 6th edition, 5th printing

*** The “Whim” of God for knowledge of Himself (“Who am I?”) manifested
as Sound. This Oceanic Sound is of God and is God and contains, and is, His experience of Power, Knowledge, Bliss. The emergence of this Sound through what is called the “Om-Point” or Its Creative Utterance produced the worlds of Mind, Energy and Matter. This Primal Oceanic Sound is the Root of all forms and creatures and men and they are continuously connected with It and derive their life from it.”  – Meher Baba, p. 69, Stay With God by Francis Brabazon

«RELATED READ» POEMS BY GEORGE PAYNE: If You See My Ego, I Am Not the Body and more»

A Buddhist Chaplain Shares How to Cope with the Pandemic

Bhakti regains her vigour, not her sons