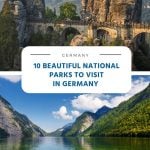 Spread across Germany are numerous national parks, all waiting to be explored by nature and adventure travellers. Whether you’re interested in discovering the flatlands in the Wadden Sea or hike through the thick forests in the South, the German nature reserves offer infinite opportunities to feel at one with the great outdoors.

Here is our list of the best national parks to visit in Germany. Our list includes national parks dotted with extinct volcanoes, picture-perfect pine forests, and rare wildlife species.

This gem in the north of Germany merely reminds travellers of a subtropical destination, rather than a German reserve, and you’ll find this national park on the coast of the Baltic Sea. The sea has turquoise shades, and the beaches are almost Mediterranean-like. Jasmund National Park is especially admired for its chalk cliffs that rise up directly next to the sea. At some locations, the crags dominate the landscapes with heights up to 161 metres.

At Königsstuhl National Park Centre, you can enjoy great perspectives of the chalk cliffs from a viewpoint. The on-site information centre is an excellent source of information on the national park, as well as Rügen island. 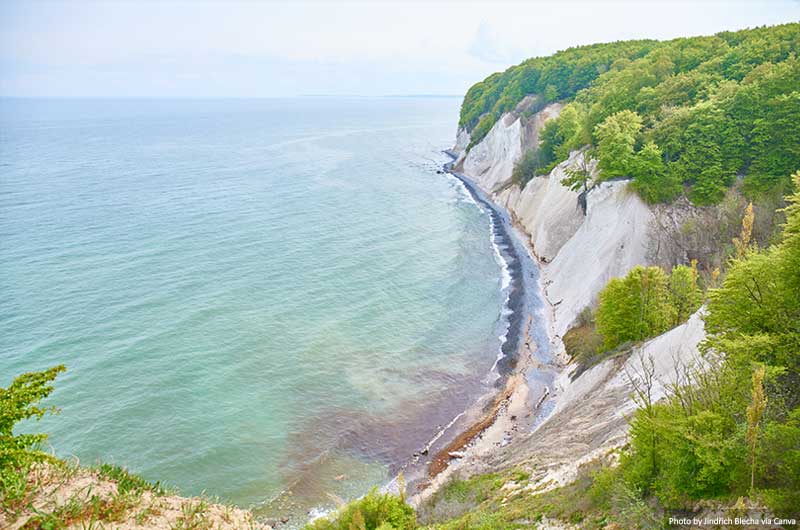 Once an active hotspot of volcanism, the scenery within the Eifel National Park has been mostly defined by the brutal forces of nature. Therefore, dramatically shaped mountains and lakes are just some of the spectacular features you’ll find in this area. The Eifel National Park has gorgeous mountain biking and hiking trails, thanks to the hilly prospects, the presence of beech forests, and the possible interactions with wildlife. Wild cats and black storks are some of the rare and exciting animals that also roam around in the dense woodlands.

Hardcore hikers can tackle – parts of – the Eifelsteig, a grand walking route that crosses the national park over a length of 313 kilometres. Numerous volcanic remnants, creeks, lakes, and waterfalls along this route illustrate the Eifelsteig slogan “Just you, the water and the rocks”. 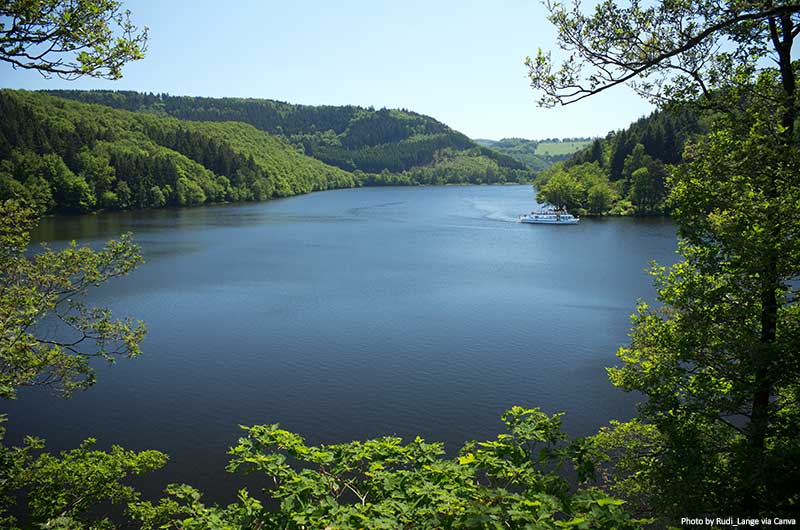 Those who seek peace in nature are in the right spot when wandering through this Central-German national park. The Harz is a nearly uninhabited area and therefore the perfect environment for animals and wildflowers to flourish. Known for its enchanting mossy forests, Harz National Park is blessed with natural jewels such as the elusive lynx and several species of deer, as well as over a thousand types of plants. For botanists who can’t get enough, Brocken Garden on the namesake mountain peak has 1800 species of alpine plants from across the globe. Around Brocken, a seemingly endless network of trails enables you to delve into the woods and mountains.

Daredevils can cross the Titan RT suspension bridge, which at 458 metres is one of the longest pedestrian suspension bridges in the world. From a height of 100 metres, you can look out over a water reservoir and the woodlands. 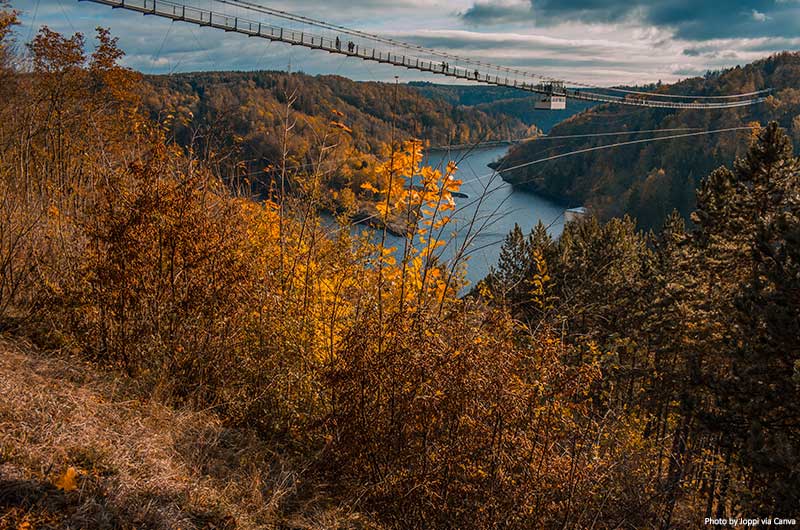 The Black Forest National Park (Schwarzwald) contains ancient woodlands in German’s southwest and is near the border with France and Switzerland. Protection of these lands has resulted in rich vegetation and heaps of wildlife, such as eagles, owls, and black grouses. When hiking the green trails, you’ll be accompanied by prosperous wetlands, waterfalls and vistas of the ever-rolling landscapes of the Black Forest.

Triberg Waterfalls is particularly worth visiting, as this cascade drops from a height of 163 metres, spread over 7 levels. For a bit of action, walk the Wildnispfad (wilderness path), a trail on which you’ll have to find your way by scrambling over and ducking under countless trees.

In winter, the Black Forest becomes a favoured hub for ski and snowboard enthusiasts. 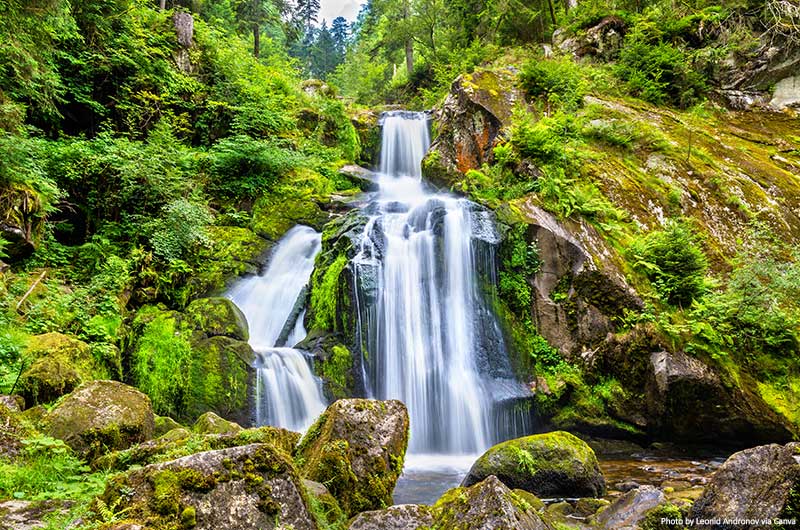 Saxon Switzerland National Park is the only national park in Saxony and also one of the most spectacular in the country. Most eye-catching are the dramatic rock formations, that rise like chimneys over the rivers and valleys of this eastern German state.

Bastei Bridge (seen below) is a captivating spot and provides an opportunity to make your friends at home jealous with drool-worthy photos. This stone bridge connects several rock pillars for tourists to get perspectives of the alien formations and the lush vegetations all around.

Intriguing as they are, the rugged landscapes are a playground for rock climbers, fit hikers, and mountain bikers who are up for a challenge.

Saxon Switzerland is one of the parks that is easily visited through a tour. You’ll find some of these available through our partner GetYourGuide. 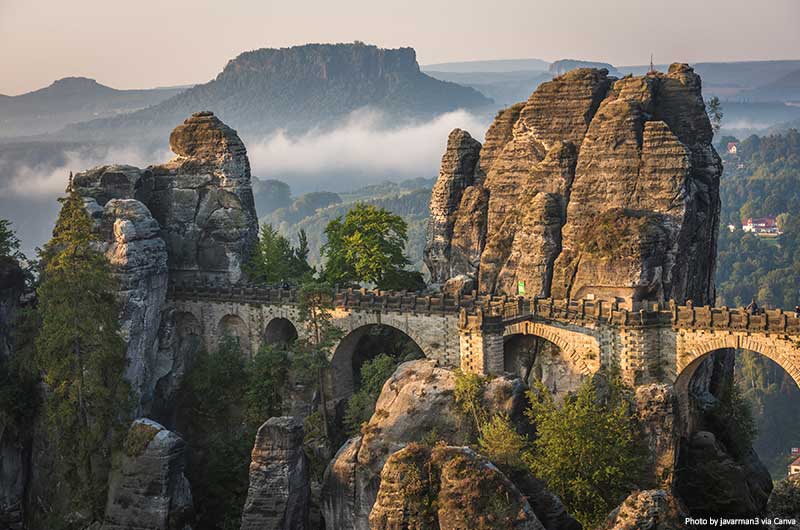 Of all parks in Germany, the Bavarian Forest Park can be described as the most untamed. Although rare to spot, animals such as the lynx, wolf, and brown bear call these woodlands their home. Apart from these exciting mammals, the Bavarian Forest Park can easily compete with other parks in terms of scenery. One of the most exceptional locations is the Rachelkapell, a wooden chapel with stellar views over the Rachelsee lake. For more aspects, head over to the Baumwipfelpfad. This stunningly designed viewing platform has several levels and looks out over the canopy. 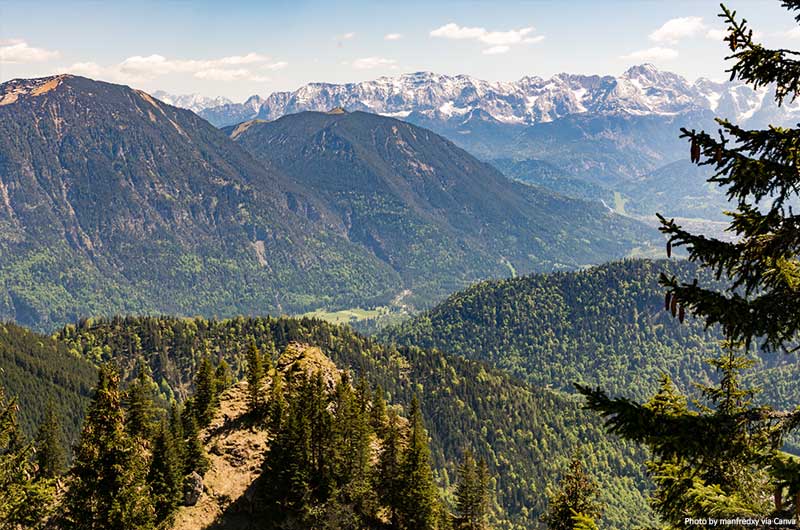 Berchtesgaden National Park dishes visitors with the best scenery imaginable in the German Alps. Perfectly clear glacial lakes, dramatic backdrops of mountains, and jaw-dropping observation decks are the selling points of this region. Indulge in the allure of Berchtesgaden by renting a kayak or joining a cruise to sail across the lakes Königssee and Obersee. Here the peaks of the German Alps are often reflected perfectly in the water. If you look up to the skies, you might even spot eagles circling around, or marmots and ibex jumping around on the rocks.

If your main goal is to see magnificent landscapes, Berchtesgaden National Park might be the most compelling pick from this list and a must-visit. 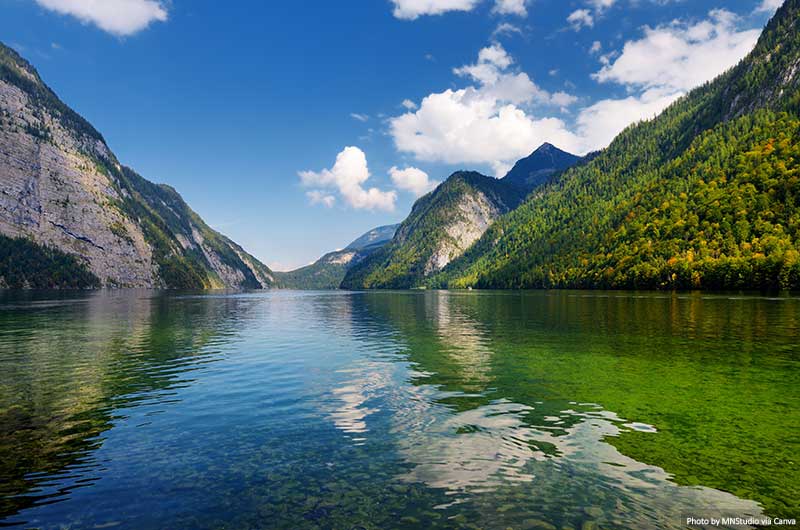 If you’re into beaches, the sea, and marine life, then Schleswig-Holstein Wadden Sea National Park should be high on your list of nature spots to visit in Germany. With its mudflats, typical for the Wadden Sea, this national park is one of the few places in Europe where you can actually walk on the bottom of the sea at low tide. Another rare opportunity is a boat tour which brings you close to the Wadden Sea’s seal colonies. You might even spot some porpoises along the way. Bird spotters will feel at home in the protected areas near Belum, where large colonies of aquatic birds gather to feed and breed. 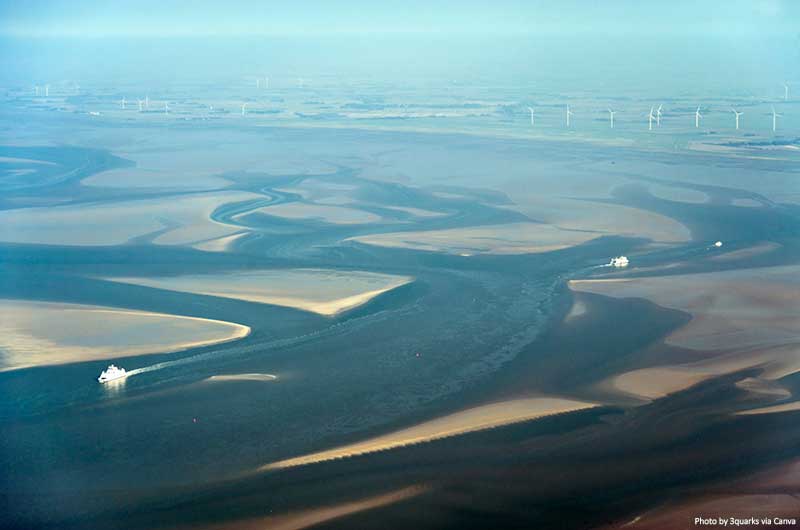 The Western Pomerania Lagoon Area National Park (Vorpommersche Boddenlandschaft) is another example of Northern Germany’s beauty. The atmosphere on this peninsula is genuinely charming; with kilometres of powdery white sand, mighty dunes, tidal ponds, and picturesque lighthouses the variety is remarkable. Mainly being a flat national park, this area on the Baltic coast is ground zero for leisurely cycling. Unique features of the Western Pomerania Lagoon Area include lagoons and prairie-like heathlands behind the dunes.

Although modest in size, the Hunsrück-Hochwald National Park is nonetheless a biologist dream. The forest – the primary habitat here – hosts the largest population of the shy European wildcat on the continent and stunning flora like carnivorous sundews and orchids. Other commonly spotted inhabitants of Hunsrück-Hochwald are wild boar, deer, black storks, and many types of bats.

Hunsrück-Hochwald National Park has plenty of sites that refer to ancient civilizations, such as the Hillfort of Otzenhausen which was constructed by the Celts around the 5th century BC. Marked trails allow you to explore the ruins and surrounding forest.

Each of Germany’s national parks has its own unique identity and features, from the mudflats in the Wadden Sea and the cliffs on the Baltic Seacoast, to the ancient woodlands elsewhere. When travelling to these places, you’ll be soaked up in a magical world of waterfalls, mysterious walking trails and some of the rarest animals in Europe.

Huub travels around the world as a digital nomad since early 2018, while working as a travel writer. His passion for travel is driven by connecting with locals and searching for different landscapes. Always joined by his favourite travel companions: a camera and notebook. [Read full bio]

We recommend the below options to book your hotels, activities, flights and other transport:

Please note that we get a small commission if you purchase via our referral links. We use this to invest in new content and improving this website.

Dreaming about your next trip? The perfect Galapagos itinerary