Translated from Japanese by Shishou(師匠) 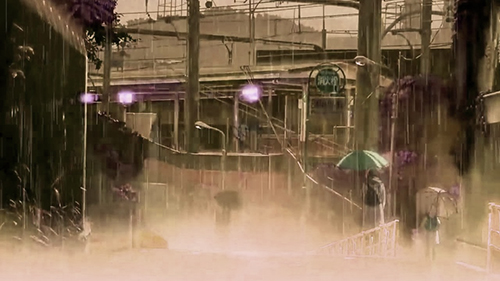 The story, which I’m about to tell you, was narrated to me by my friend T-san. Now, this creepy experience happened to him around 10-years ago or so, and he swears that it was something he experienced personally, and so I don’t doubt him.

As T-san narrates, he was in his car that ominous day. He had been to his friend’s house and was now driving back to his own house. The timing must have been somewhere around 4 in the afternoon.

After a few hours of driving, he felt something was off. He could hear the sounds of water-droplets hitting his car’s body. But it wasn’t the sound of rain that startled him, rather, he was vexed because the weather outside…was clear as a day! Then, where was this rain-droplets sound coming from?

T-san, as he recalls, said that he was still driving at this point. He was trying to come to terms with this perplexing phenomenon…when suddenly, his car hit something. A huge thud resounded inside the car. He felt a chill run over his body…an eerie chill.

Whatever it was that had hit the car was not visible to T-san. He, however, felt the presence of something sinister on his car’s hood. He described the presence as something that was out of this world—something supernatural. His hands were trembling as he continued driving towards his destination.

T-san sped up his car in the hope that the ‘entity’ would fall due to the higher speed of the car. While speeding, he was shouting at the top of his voice. “GO AWAY FROM ME!” his trembling mouth belched out the words. The rain could still be heard.

T-san was going at an insane speed. The traffic light in front of him turned red. Since the transition of the light was so sudden, he had to brake hard. As soon as he braked his car, there was a sound of something falling over to the ground. With that sound, the presence of the entity was no more. Also, T-san could not hear even the rain-droplets.

Paralyzed by fear, T-san somehow reached his home. T-san, who now wanted to know the explanation of what he experienced, called his psychic-friend and narrated the whole incident.

The psychic-friend revealed to him that one year ago there was an accident at the spot where T-san felt the entity on his hood of the car. On that day, it was raining heavily. An old-woman was crossing the street when a car came and hit her with full force. Now, since the woman had a small body, her body got stuck on the hood of the car. Her body was stuck in that position until the car made a stop at a red light, and with the stoppage of the car, her body tumbled to the ground. She was dead. T-san was overcome with grief after hearing this.

When I head this story from T-san, I was ambivalent. I didn’t know whether to be scared or to feel sorry for the old woman. What makes some souls enter nirvana? What turns some souls into vengeful spirits? I had no answer.

It seems that entering nirvana upon death is not an easy thing to do, is it?

What you think about this story? write in the comments below.
Also, subscribe, bookmark, and share this post to spread creepiness in the whole world.
If
you want to get notified about my new posts, then subscribe to this
blog by entering your E-mail in the box in the right sidebar.

What Happened When I Switched From Macs to Windows